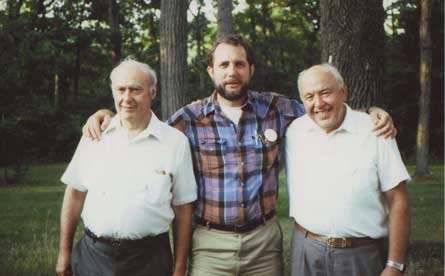 In the center, Steve Benton, born in 1941, died in 2003 at the age of 61 is the inventor of the rainbow hologram. He has developed dozens of patents in the Polaroid laboratories before becoming Director of the MIT Media laboratory. Also interested in art, it was at his initiative that the MIT in 1993 acquired the collections of the Museum of Holography in New York. He described holography as a true “crossroads of art, science and technology." To the left, Emmett Leith, born in Detroit in 1927, died in Ann Arbor in 2005. He perfected the Gabor process, where the images overlapped with the observation, adding the reference beam which can reconstruct a truly three-dimensional image. Most of Leith’s work on holography is based on his research on radars that he made for the Radar Laboratory group at the University of Michigan starting in 1953. In 1979, U.S. President Jimmy Carter awarded him with the “National Medal of Science” for all of his research.
To the right, Yury Denisyuk, who was born in 1927 in Sochi and died in Saint Petersburg in 2006. He was member of the Academy of Sciences of Russia and invented a holography method which is visible with white light by reflection. Denisyuk led the AF Ioffe Physico-Technical Institute of St. Petersburg and the SI Vavilov State Optical Institute Laboratory. His first trip to the West was in Besançon in 1970. Leith and he met for the first time in Novosibirsk in 1973, during a holography conference. In the 80s, they developed regular contacts. Both remained active until a very old age: Denisyuk gave his last lecture at Varna in 2005. It is a privilege to have known these three founders of holography: Steve Benton, Emmeth Leith, Yuri Denisyuk and to have appreciated their kindness and simplicity. Take a look at them in the Museum photo gallery.